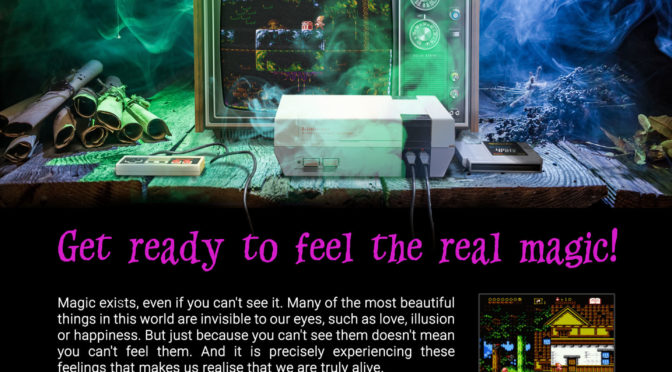 After more than 4 years in development, 4MHz’s most ambitious project enters its final stretch and will be shown in a playable demo at GAMESCOM’22.

Malasombra is a new videogame in development by the 4MHz team for NES consoles. Set in legends and fairy tales, it presents an epic adventure with an exciting story where nothing is what it seems. An ambitious project that enters its final stretch of development to be published in the second quarter of 2023.

A terrible spell, a forbidden grimoire, an evil sorcerer, wizards, princesses, witches, bounty hunters, palace intrigues and magic, lots of magic await in Malasombra. You play Pirou, a humble aspiring magician who sees his beloved taken away from him on his wedding day by the evil sorcerer Malasombra, who turns everyone at the celebration into toads. Pirou will need to gather the pages of a powerful grimoire, which will allow him to acquire new abilities through transmutations, in order to destroy Malasombra, recover his beloved and reverse all the evil he has caused to the kingdom.

Malasombra is currently in the final stages of development and will be shown in playable demo format at GAMESCOM 2022 courtesy of Retrospiel, thanks to the collaboration of Christoph Noll and José María Velo (octopusjig).

GAMESCOM is one of the most important video game events in Europe, taking place from 23-28 August in Cologne, Germany (GAMESCOM Retro Gaming Area, hall 10.2, Retrospiel stand).

New action-adventure videogame in development for the NES, where a modern take on the classic tales will take the player on an adventure destined to become legendary.

In a beautiful, faraway place, the celebration of the royal wedding between Astrid, the princess of the kingdom, and Pirou, a young apprentice magician, is cut short by the irruption of Malasombra, a sorcerer with a grudge against the king for condemning him to banishment some time ago due to his perfidious advice.

Malasombra turned everyone present into a toad except for Pirou, who managed to repel the spell with his lusty apprentice wizard’s wand, and kidnapped Astrid, as revenge for so many years of suffering in exile.

Pirou could not leave things as they were, so he set out on a desperate search for a way to get his beloved back.

Malasombra began its development in March 2018 with several concept tests and scenarios for Amstrad CPC. During the first months of work, the project was maturing the story and growing in dimensions, until in October 2018, graphical and programming tests began on NES. After the first satisfactory results, the team decided to migrate the project to a new platform, becoming an exclusive development for NES. A very complicated decision for the whole team, as it meant leaving the comfort zone, but with the certainty that it was the right decision given the ambition deposited in the project.

Since the end of 2018, 4MHz has been working exclusively on this project. This has been a huge challenge for the whole team, as its members have had to learn in depth the ins and outs of the NES, a system unknown to everyone until now. On a technical level, a whole new engine has been developed in C and assembler, based on Nesdoug’s Neslib. Several exclusive tools have also been created to facilitate and accelerate the development process. All this has involved many hours of study and testing, as well as tackling new ways of working and documentation.

4MHz has always enjoyed creating its own physical editions, and this aspect was also a big challenge. This time the challenge was great, as creating an NES cartridge requires advanced knowledge of electronics and NES hardware. At the moment, 4MHz has a fully functional prototype cartridge on real hardware.

Malasombra is currently in a mature phase of development, with an estimated completion date of the second quarter of 2023. The 4Mhz team is fully committed to the development of this project, which is currently occupying all our efforts and enthusiasm.